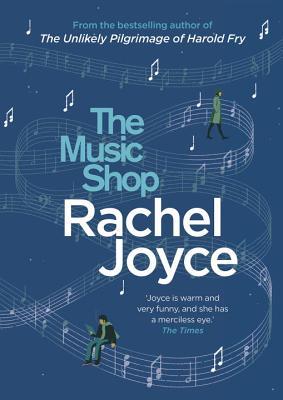 Review:
I loved Rachel Joyce’s The Love Song of Miss Queenie Hennessy, as devastating, heartbreaking as it was and while I haven’t read any of her other books something about The Music Shop tempted me into picking it up. And fortunately I was given an advance copy shortly after hearing about it at the Penguin Random House Fall Preview.

Set in the 1980s, the book focuses on Frank the owner of a music shop who stubbornly refuses to get with the times and stock CDs (choosing instead to continue to own deal with vinyls). Among the cast of characters are his assistant  and his fellow neighbours who own various shops/businesses along the same old street and neighbourhood that has seen better days. I loved that this novel was inspired by the author’s real life meeting with a music shop whose owner was able to find the musical “cure” for her husband’s insomnia. This magical quality of being able to “know” what music a person needs to hear which is an ability that her protagonist, Frank also shares.

If I were honest The Music Shop started off a bit slow for me as I didn’t care about any of the characters. However, before long I found that I had been unknowingly drawn deep within the world and characters of the book. This may have been a result of the beautiful, whimsical prose. Or perhaps it was the fact that over time we get enough glimpses into the past of each of the characters helping us to understand why they are the way they are in addition to why people care about Frank a great deal.

While some may say that The Music Shop is an overly sentimental read, I loved that I was left with a warm feeling when I was finished with the book. It is a definite must read for music lovers and for people who are looking for an uplifting read that is within the along the same veins as The Storied Life of A.J. Fikry by Gabrielle Zevin or even Katarina Blvald’s The Readers of Broken Wheel Recommend as it’s also about the power of the arts, and how when ordinary people get together and work together they can make the extraordinary happen whether it’s just for one person or for far more people than they could have ever anticipated. 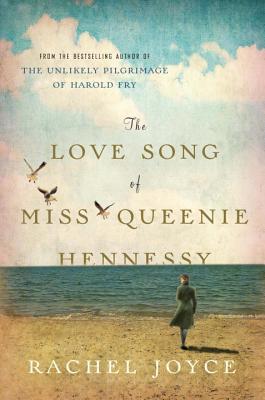 Back in 2012, a book by the name of The Unlikely Pilgrimage Of Harold Fry by Rachel Joyce came out and started making waves. The book told a fictional story of a recently retired man who receives a letter from an old acquaintance who tells him that she is dying. He then proceeds to embark on a journey to visit her, travelling by feet from a distance that you generally would not walk. The book while it had an interesting concept did not truly resonate with me though I did find it a compelling read. However when I discovered that there would be a companion novel featuring Queenie, the old acquaintance that Harold had set out to visit I knew that I would very much take pleasure in hearing her story and I was right.

Like Harold’s story, the story of Miss Queenie Hennessy was not always a joyful one either. We learn with reference to her complicated relationship with her parent in addition to who she was before she came to work at the brewery with Harold. however perhaps most surprising of all was the friendship of sorts that developed between her and Harold’s son, David. In Harold’s story we do not see much of David, and from what we do get glimpse of, he seems to be an exceedingly selfish, spoiled and ungrateful person. However in Queenie’s story we witness a different side to him, one that shows him as a troubled and lonely individual. He ends up being a more sympathetic character in that he is portrayed as being extremely flawed although he does have a bit of a softer side too. Unlike everybody else in his life, Queenie is able to see past his façade and in her attempts to assist him, she gets further involved with Harold’s life and does something she later regrets and blames herself for its result.

Queenie herself is truly a fascinating character, and she was easier to relate to and sympathize with than Harold even though both are incredibly flawed people. I enjoyed following her tale as she left her workplace and Harold and came to find and create her own home and garden in a place by the sea. And I enjoyed reading about the conversations and behaviours of the cast of characters that she encounters at the hospice she ends up in. Accordingly while I was well aware of what happens to her in the conclusion, I felt that having read The Unlikely Pilgrimage Of Harold Fry before The Love Song of Miss Queenie Hennessy did not ruin the book for me. Instead it just further enriched my reading experience of the book.

The Love Song of Miss Queenie Hennessy is both an uplifting and heartbreaking read, and it was made even extra emotional in part due to the epilogue in the final pages of the book. Rachel Joyce is an exceptionally talented storyteller and writer, and she does a flawless job in this book of showcasing Queenie’s own personal journey. As Sister Mary in the book tells Queenie, “People think you have to walk to go on a journey. But you don’t you see. You can lie in bed and make a journey too.” She couldn’t be more right, thank you Rachel Joyce for allowing me to come along on Queenie’s ordinary yet extraordinary journey.

If you like this book, you’ll love: The Unlikely Pilgrimage of Harold Fry by Rachel Joyce