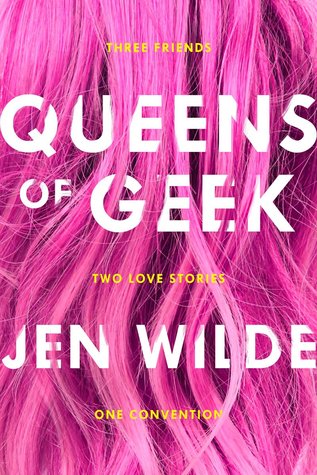 Review:
Back in high school, I was in a group of self-professed “artsy” anime geeks. And as we all had fairly strict parents, our dream was to one day attend Anime North. (A fan run anime convention) Which was probably why I enjoyed Queens of Geek so much, I could definitely relate to the excitement of attending to a convention on your own and with your closest friends for the first time.

Queens of Geek is told from the perspective of two girls who are best friends. Taylor is a passionate Queen Firestone fan girl who is prone to panic attacks and in love with her other best friend, Jamie. Meanwhile, Charlie is a YouTuber and actor who’s still recovering from her public breakup with her co-star and discovering that much to her surprise that her crush on special con guest, Alyssa Huntington might not be so one-sided after all.

This is another book that accurately captures what it’s truly like attending to a convention for the first time with your friends. And for those of you who have been to a convention, you guys can definitely relate to the atmosphere in the book as well as some of the experiences of the characters. (Although the majority of us probably can’t relate to having access to VIP backstage passes) On the other hand, if you haven’t been to a convention, I believe the book does a fairly decent job of transporting you to the convention by having you live vicariously through the characters.

Queens of Geek is a book filled with tons of amazing nerdiness and geekiness. I adore the positive portrayal of female friendships and relationships. Charlie, Taylor and even Jamie are all so supportive of each other and their dreams that it’s just so heartwarming. If you’re looking for a delightful book that will bring a smile to your face, then consider picking up Queens of Geek.