Who is it by? Joe Ide is a writer who is of Japanese American descent. His debut novel, IQ was inspired by his love of Arthur Conan Doyle’s Sherlock Holmes stories in addition his early life experiences of growing up in South Central Los Angeles, an economically depressed area with a largely black population and an area where gangs and street crime were far from uncommon. Ide currently lives in Santa Monica, California, with his wife and their Golden Retriever, Gusto.

What is it about? Loner and high school drop out, “IQ” aka Isaiah Quintabe is the man they call when the LAPD needs extra assistance on their cases especially in the neighbourhood East Long Beach with its high crime rate.

Unafraid to get his hands dirty, in this first book Isaiah finds himself investigating various dangerous suspects when rap mogul’s life is in danger and he hires IQ to find out who’s threatening him.

Where does it take place? In a rough area of Los Angeles, California a setting that was inspired by the neighbourhood that the authour grew up in.

Why did I like it? For those who are looking for a mystery novel with a more diverse cast, IQ definitely fits the bill. With its unique, urban setting and characters it definitely made for an intriguing read. The authour does not hold anything back whether it’s the language used by some of the characters, or the somewhat graphic descriptions of violence, abuse and crime, it was refreshing to read a mystery where even when the case is closed it’s not quite closed. After all, in reality just because you solve a case it doesn’t mean that all is well, and sometimes justice may or not be served in a fitting and fair way. Still the ending was satisfying and manages to be somewhat uplifting. Overall, IQ was an interesting modern take on the classic Sherlock Holmes stories. And while I didn’t love this book I am curious enough to want to pick up the next book in the series if only to see “IQ” face more of the demons of his past including trying to solve the mystery of his brother’s death. Finally, for those who are interested in book to TV adaptations, the IQ series is being developed as a TV series which I’m actually looking forward to seeing as I think the story would translate well onto the small screen. 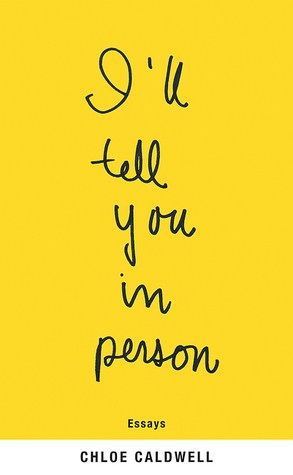 Review:
I found out about Chloe Caldwell’s second collection of essays, “I’ll Tell You in Person” through an article that was shared on Twitter. It spoke of the collection of essays telling the experiences of a young woman caught between the ages of 20 and 30 which made me feel that perhaps I could relate to what she had to say. Additionally, as I was in the midst of trying to write my own personal essays I felt that it would be helpful to read what others have written. Apparently I’m not alone in doing this, as Chloe also notes in an interview included in the book that she read a bunch of personal essay collections while in the process of writing this book.

Initially when I started reading the first few lines of the book, I found that I’ll Tell You in Person did indeed speak to me. However, my initial infatuation with the book didn’t subside as in the end like any collection, some of the essays were strong while others were not as well written. Furthermore, some of the essays were about topics that I knew little of and/or could not relate though majority of the essays were interesting to read. In the end, my two favourites that stood out in the book, would have to be “Failing Singing” about giving up a talent that you have and “Sister Less‘, a heartwarming essay on the bond that Chloe forms with Bobbi, who the daughter of writer, Cheryl Strayed.

I’ll Tell You in Person, is a short read that makes it the perfect companion for a commuter. However, be forewarned that it does pack a powerful emotional punch, especially for those who find themselves in a similar stage of their life. Meaning one that’s prone to a great deal of imperfection and disillusionment as well as a bit of disorientation. But, hey we all need to go through it at some point, no?

Review:
I’m a total history buff and I love learning about kick butt women whose accomplishments have been mostly lost to history, thus this book was the ideal read for me. Furthermore, it made for a perfect companion for Jessica Bennett’s The Feminist Fight Club, which was the other book I was reading at the same time.

Sam Magg’s Wonder Women: 25 Innovators, Inventors, and Trailblazers Who Changed History showcases an array of pioneering female scientists, engineers, mathematicians, adventurers, and inventors many of whom I was unaware of, like Dr. Okami Keiko (the first Japanese woman to get a degree in Western medicine from a Western university) and Dr. Anandibai Joshi (the first woman physician) who were actually well acquainted with each other. I also loved reading about Dr. Marie Equi, who was a birth control advocate and not afraid to get physical to defend what’s right.

In addition to the 25 women that were featured there were also various mini biographies in addition to interviews with women who today are working in the STEM (Science, Technology, Engineering and Mathematics) field. Overall, Wonder Women was an entertaining read due in part to the illustrations as well as Maggs’ witty commentary throughout the book of the women featured. And I appreciated how diverse the women were in the book as there were women of various races, sexual orientation and status. A great read for young girls and anyone who is looking for a bit of inspiration.

Review:
As someone who has a close relationship with her mother, I can’t even begin to imagine my life without her. As a result, I felt this book would resonate with me as the author loses her mother to cancer, and it forces her to re-evaluate her life after having lived with a mother who always needed to be in control.

I adored the travel aspect of the book, as I always do in the books I read. Although, I must confess I have never been to Paris and it had not been high on my travel priority list for some time. However, My (Part-Time) Paris Life: How Running Away Brought Me Home made me reconsider my hesitations about visiting “The City of Lights”. This may also be a result of the drool worthy, glorious descriptions that the author provides of the various foods she samples while in Paris and France.

One of my favourite sections in My (Part-Time) Paris Life was the chapter titled, “Le Dating Game”. I enjoyed this chapter for the reason that Anselmo acknowledges that dating is difficult, especially in another country with a different culture. And it was refreshing to glimpse her reflections on her past and acknowledge how her tight relationship with her mother has affected her love life. I especially love that in the end she came to the conclusion that she needs to embrace her independence and to become re-acquainted with herself as an “individual” before embarking on any serious romance.

And while I wish there was more to her story and adventure in the book, I’ll definitely be checking out her mini web series. Highly recommended to anyone who loves a good, self-searching memoir about dealing with grief, and learning to just let yourself be happy in life. If it hasn’t crossed your mind to visit “La Ville-Lumière”, it definitely will after reading this book.

Review:
The Wangs vs. World was a title that I was especially looking forward to this fall as it centres on an Asian American family embarking on a road trip after the patriarch, Charles Wang loses his fortune.

Unfortunately my unfair expectations of this book coupled with all the buzz surrounding it lead The Wangs vs. World to be a bit of a disappointment for me. For instance, this book was marketed as being hilarious and yet I seldom found myself laughing. Additionally the majority of the book seemed to drag on forever and it wasn’t until near the conclusion that the pacing sped up immensely. Speaking of the ending, without spoiling too much I will say that it came about in a rather unexpected way and it definitely made me wonder if things were left a bit too up in the air.

That being said, there were a few parts of the book that did work for me. One was the relationship between the three siblings. Of the three, I liked Saina the best and it was nice watching her character grow as the novel progressed. I think my favourite scenes in The Wangs vs. World were the ones where we see the siblings all with unique personalities interacting with one another. The interactions were hilarious and it was heartwarming to see how loyal they were to each other. For that reason, I liked the section where the family was in China and it was unfortunate that the section needed to be cut short as I liked watching them all together in one place and bonding as a family.

Jade Chang’s writing at times was reminiscent of Kevin Kwan’s Crazy Rich Asian series, which fortunately assisted in moving the story along during certain sections. However, unlike Crazy Rich Asian there was no translation provided for all the Chinese dialogue (at least not in my advance reader’s copy). This only served to alienate me more from the characters as it’s difficult to connect with both the stories and characters when so much of their dialogue is another language that you are not familiar with. Though some of their conversations may be understood vaguely through the context, it still takes away from the main story.

Overall, while it did not work for me mostly since it was not the humourous novel, it was marketed as, The Wangs vs. World still was an interesting look a one family’s Asian immigrant experience and was a decent effort for a début novel.