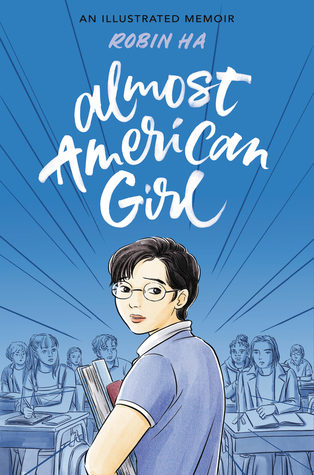 Review:
Almost American Girl is a graphic novel memoir written and illustrated by Robin Ha. Though it resembles a YA novel, it is also based on the creator’s life experience. The book starts with Ha Chuna aka Robin being told by her mother that they are going to the US to visit a friend. However, shortly after they arrive, she learns that she and her mother will not be returning to South Korea as her mother will be marrying her “friend”. The rest of the book follows Robin’s journey as she struggles to adjust to her new life while dealing with the challenges you would expect she’d face including difficult step-siblings, unpleasant food, bullying, and trying to adapt to a new culture and language.

While Almost American Girl is Robin’s story, it also reads as a “love letter” to her mother who over the course of the novel faces several setbacks but shows enormous strength and resilience. Furthermore, while Robin’s passion for art is central to this book, her love and admiration for her mother is just as obvious. I do however wish we had more time with “adult” Robin as the jump from her high school years to her adult years felt a bit rushed near the end. It would have been interesting to get more of a glimpse of her time in Korea as an adult as well as her life in the “present”. Though I understand why this was not the case since the book is meant to be more for a YA audience and of course there is not enough room to fit everything in.

This being a graphic novel, I can’t forget to talk about the illustrations. As a result of reading and reviewing the ARC, my copy of the book was mostly in black and white with only the first few pages in full colour. Personally I did not mind this as it felt as if I was reading manga plus it also helps keep the focus on Robin’s story. Other than that, I found the artwork to be simple and clean throughout. However, the art is also incredibly detailed when it came to the backgrounds and in highly emotional moments as both the detailed facial expressions of the characters and the backgrounds helped to set the mood for these scenes. Another interesting visual element in this book, which was also an example of visual elements replacing words was how scribbles and symbols were used to show the words and the occasional conversations that Robin couldn’t fully understand.

A worthwhile read, Robin Ha’s Almost American Girl is for the kid (or adult) who feels or has ever felt like an “outsider” and can relate to the awkward and painful moments of growing up in America.