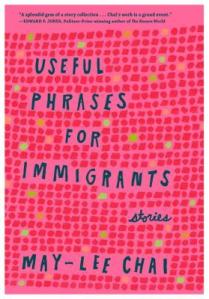 As both my parents are immigrants from an Asian country, I was I was immediately intrigued enough to pick up May-Lee Chai’s collection of short stories. There are eight stories in this collection, and every story is about either Chinese immigrants and/or migrants in China. Though mostly well written, I found that these stories weren’t up my alley. They did however make me stop and think several times as well they made me truly appreciate how fortunate I am to be a child of immigrants. Both my parents, like many immigrants went through a lot just to give their kids a brighter future. That being said, there were a few stories which I enjoyed. “Ghost Festivals” was an interesting one as it looks at how traditional Chinese families tend to treat the issue of one of their own being gay. My favorite story, however would have to be “Shouting Means I Love You”. The last story in this collection, this one resonated the most with me as it looks at the relationship between an adult daughter and her elderly father. I loved this one because I could relate to it so much, especially with all the misunderstandings and the stubbornness of both the characters. While slim in size, Useful Phrases for Immigrants is quite powerful and the stories deal with pretty heavy issues common to all immigrants not just those from China or even Asia.

The Girl Who Reads on the Métro by Christine Féret-Fleury

The description of Christine Féret-Fleury’s The Girl Who Reads on the Métro would have you believing it was another feel good read set in Paris. However, nothing could be further from the truth. While there were some potentially heartwarming moments in The Girl Who Reads on the Métro, I found myself not caring as much as the characters were well-developed. Furthermore, nothing truly happens within the almost 200 pages of this book. And while this would have been fine if this book about books showed us more of the journey of the books, it doesn’t which made for a dull and melancholy read. Still, I could not help but appreciate the fact that there was no romance forced into Juliette’s story. A mostly disappointing read that only showed some promise near the end, I did love looking up the various books mentioned and adding some of them to my pile of books to read.

May wasn’t actually that bad, in fact it went by pretty fast for me plus I finally got to read more of the titles I’ve been for excited for some time now. This meant more light-hearted reads and more books by Asian authors featuring Asian characters. I plan to continue this trend with my June reading pile and with weather become nicer where I live, I’ll finally be able to make use of the outdoor hanging chaise lounger that I treated myself to and get some outdoor reading done! As always, please check out the link in my bio for the list and reviews of everything I read last month.⁠
Shelf Stories!
For my first book in May, I did a buddy read of Tokyo Ever After by Emiko Jean with @adrianaracu. We both ended up liking it and found it to be a quick read. If you like “Really Royal Reveal” stories like The Princess Diaries and What a Girl Wants then you’ll probably also enjoy Izumi’s story of discovering that her biological father is the Crown Prince of Japan! For my review and blog tour stop post, go to the link in my bio.
Last month’s reading marks the end of the more serious and at times downer reads. I’m very much looking forward to reading romances with happy endings for the next couple of weeks! And I’m got a couple of my most anticipated reads to look forward to!
Unlike 2020, March 2021 didn’t feel like it would never end. Although, it probably didn’t hurt that I wasn’t sick and stuck in bed this time around. Anyway, after months of reading just light-hearted romances, I thought I’d change up my reading for March. Starting with an adult fantasy novel written by Canadian author, @hmlongbooks, which I actually enjoyed despite not being a huge fan of the fantasy genre. I also FINALLY got around to reading the Pulitzer Prize-winning novel, The Sympathizer. While it was well written, it was also a bit of a dark and depressing read. Anyway, check out the link in my bio for the full list of what I read in March.⁠
Happy Wednesday!
Loading Comments...
Comment
×
%d bloggers like this: