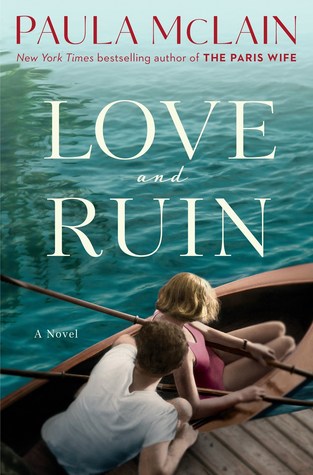 “I didn’t want to cause trouble; I only knew what I knew. That Ernest could eclipse me, large as any sun, without even trying. That he was too famous, too far along in his own career, too sure of what he wanted. He was too married, too dug into the life he’d built in Key West. Too driven, too dazzling.

A couple of weeks ago, I had the pleasure of seeing and hearing Paula McLain talk for the second time. The first time was for her book Circling the Sun which is a fictional account about the life of Beryl Markham, a British-born Kenyan aviator, adventurer, and racehorse trainer. In her latest book, Love and Ruin she returns to Hemingway by telling the story of Martha Gellhorn, a prominent war correspondent during her time and the woman who would become Hemingway’s third wife.

Now I’m not a fan of Hemingway, despite the fact that he is a great writer, however I was incredibly interested in Martha Gellhorn’s story solely for the reason that I knew her as a woman who despised being a “footnote” to Hemingway as she was an accomplished writer on her own before and after her marriage. And even though I was unable to connect with Beryl Markham in Circling the Sun, I was willing to give Love and Ruin a chance since I was actually intrigued by Martha Gellhorn, the person in addition to the life she led.

I’m not as avid of a historical fiction reader as I used to be so I wasn’t sure what to expect from Paula McLain and Love and Ruin. However, I was pleasantly surprised that unlike Beryl, I was actually able to connect with the character of Martha. I loved her desire to jump right into the action and obtain the stories from the civilians themselves. And I could relate to her love of adventure, especially as she grew older.

For the majority of the novel, Love and Ruin is a quiet novel and not much happens. However, it does eventually pick up and of course, the prose is lovely from start to finish. That being said, Martha’s relationship with Hemingway often feels like an afterthought. As a result, I felt like the pair’s falling out came quite suddenly even if there were hints here and there of the cracks in their marriage. Perhaps this is why I found the sections where readers gain a glimpse into the consciousness of Hemingway to be a compelling read. In fact, initially, I actually preferred them over Martha’s story.

With Love and Ruin, Paula McLain has solidified her place as not only a writer of historical fiction but one who tells the stories of the women who are often forgotten in the mainstream history. These are the women who if even referred to in history books, may have been portrayed in not the most flattering way. From her books, I have enjoyed rediscovering the extraordinary women who have appeared in them so far and I look forward to seeing whose story she will tackle next.

2 thoughts on “Book Review | Love and Ruin by Paula McLain”